After weeks of headlines about the coronavirus outbreak, markets have been caught in a volatile pattern of surges and retreats. Why exactly do the markets care about the virus? They care because of its effect on global economic growth and on earnings for companies. Businesses are dealing with lost revenue and disrupted supply chains due to China’s factory shutdowns, tens of millions of people remaining in lockdown in dozens of cities and other countries extending travel restrictions.

With many companies and countries depending on the health of China’s economy, here are a few ways the outbreak is sending ripples around the world.

Consumption.  With a population approaching 1.4 billion, China is the largest market in the world. With stores shuttered and work opportunities reduced, Chinese consumption has ground to a virtual halt. Companies around the world that sell products to Chinese consumers are seeing massive hits to revenue.

Production. Numerous Chinese factories have shut down as the government attempts to stem the spread of the virus. That reduction in supply - seen in Apple’s decreased iPhone production and the shutdown of Tesla’s Shanghai factory - further inhibits economic growth not only for Chinese firms but also for multinational corporations with factories in China.

With firms producing less, demand for inputs such as oil also slow down, leading to broad reverberations on the global economy.

Supply-chain disruption.  Firms that import parts from China have to find new suppliers for crucial components. In some cases, the infrastructure does not exist to quickly shift input production out of China. Even where non-Chinese suppliers exist, the delay in locating and negotiating with those suppliers costs firms sales.

Some carmakers including Nissan and Hyundai temporarily closed factories outside China because they couldn’t get parts.

The construction industry is also likely to be affected because it imports 30% of its products from China, more than from any other country according to the chief economist of Dodge Data and Analytics.

Travel. Global businesses depend on the mobility of labor, especially at the executive level. Travel to and from China and its neighbors have plummeted, making it harder to do business. This hurts transportation companies in particular.

The travel and tourism industries were hit early on by economic disruption from the outbreak. Global airline revenues are expected to fall by $4-5 billion in the first quarter of 2020 as a result of flight cancellations, according to a report from the UN’s International Civil Aviation Organization (ICAO).

ICAO also forecasts that Japan could lose $1.29 billion of tourism revenue in the first quarter due to the drop in Chinese travelers while Thailand could lose $1.15 billion.

Information uncertainty.  China’s leadership has been sending mixed messages regarding the coronavirus. Observers have cast doubt on the official infection and death toll numbers, citing inconsistencies in the trajectory of cases. Moreover, while Chinese president Xi Jinping did not make remarks on the epidemic until January 23, an internal speech he delivered indicates he knew about the virus as early as January 7. That means authorities may have done less to contain the virus than they should have, and raises questions about their commitment to public health.

Skepticism of Chinese authorities amplify sell-offs as markets price in the possibility that the virus is much more widespread than officially believed which enters the uncertainty the markets do not like. However, if the virus is contained this could be a temporary pullback and provide a great buying opportunity. One thing to keep in mind is this is not the first time we’ve grappled with market reactions to an epidemic. Here are some examples from previous outbreaks: 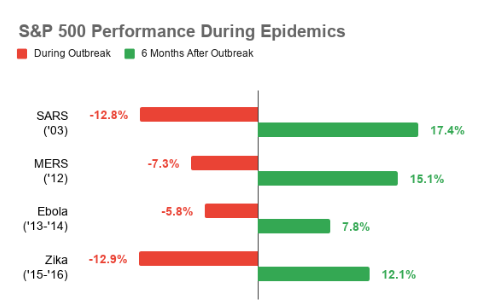 While it’s easier said than done, ignore these panic-inducing headlines and stick to your investment/financial plan. The old idiom “buy low, sell high” is never achieved if an investor gives into fear and sells stocks in the midst of a general stock market decline, particularly one that could be short-lived.

Negative emotions, like fear, caused by external factors beyond our control are never an investor’s friend, often leading to rash decisions like selling at the first sign of a market downturn. It’s important to remember that just as stocks go up, they also go down. That doesn’t make them any less concerning while they’re happening but it’s best to keep emotions in checks to prevent from selling at precisely the wrong time.

We do not want to make any knee-jerk reactions during times of volatility and want to stay committed to our investment strategy without reacting emotionally which is why knowing your risk tolerance level and the risk in your portfolio is so significant. If you are unsure of your individual risk tolerance or the risk your portfolio is exposed to, please reach out to us directly and we can send you the analysis for free. We have found that people tend to want to reassess how much risk they are comfortable taking during times of volatility.

However, we want to reassure all Ironhorse clients that we will continue to track the current market condition and are constantly analyzing portfolios and asset allocations for any adjustments that may be required while monitoring to see if the sell-off persists or if we will see a rebound rally as we have before.